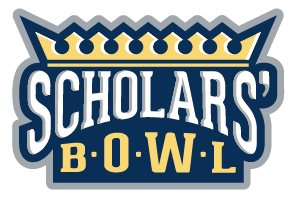 Scholars' Bowl
Connect With Us

In it's 36th year, Scholars' Bowl brings the area's brightest and best high school students to a single-elimination competition of academic abilities.

Only one team can take home the Scholars' Bowl Championship trophy and cash prize, plus bragging rights for their school.

A longstanding tradition for high school students from around East Tennessee and Kentucky, Scholars' Bowl is an important part of the legacy of East Tennessee PBS.

The show is written & produced by etpbs Mathline's Ernie Roberts. Each season, the list of competitors grows, often including 60+ school teams participating.

This year's edition of Scholars' Bowl is sponsored by Pellissippi State Community College and the Knoxville News Sentinel.

The winning school receives $1000 and the "Frank Miller Memorial Trophy" in honor of the game's founder, with an additional cash prize for the team's coach. The second place team receives a prize of $500.

Host of the Show 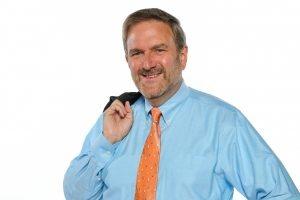 Frank Murphy is an improviser on-air, on stage, and online. Frank hosts East Tennessee PBS Scholars’ Bowl, an academic competition between area high schools. The program airs and streams online weekdays at 5:30 p.m. Frank joined Scholars’ Bowl starting with its 2017 season. In 2021, Frank became host of Up Close with Frank Murphy, a monthly late-night interview program on East Tennessee PBS.Frank and opera singer Kathryn Frady co-host a podcast and YouTube channel called the Frank & Friends Show. The podcast and travel vlogs about tourist attractions near the Great Smoky Mountains are found at FrankAndFriendsShow.com The vlogs are also featured on SeeMoreSmokies.com Fans of “Knoxville’s Greatest Hits” can hear Frank Mondays through Saturdays between 10:00 a.m. and 3:00 p.m. on 104.9 Lake FM or online at lakefm.com World-renowned forensic anthropologist Dr. Bill Bass utilizes Frank at many of his speaking engagements, which are planned by the team at BoneZones.com. Frank serves as emcee, Q&A facilitator, and occasionally as the opening act. Frank joined the comedy improv troupe Einstein Simplified a month after moving to Knoxville in 2002. The group performs on Tuesday nights in Scruffy City Hall on Market Square. The troupe’s 25th anniversary show is available for purchase on DVD at Amazon.comFrank was selected as the 2014 Knoxville recipient of the FBI Director’s Community Leadership Award. He earned the title “Man of the Year” in the Leukemia & Lymphoma Society’s 2017 fundraising competition. He served terms as president of the Front Page Foundation and as president of the FBI Knoxville Citizens Academy Alumni Association. In 2012 and 2013, Frank won the Host with the Most stand-up comedy contest to raise money for charity. In September, 2020, he joined the board of Marble City Opera.Frank was the 2014 Social Media inductee in the Friends of Literacy East Tennessee Writers Hall of Fame. He can be found on Twitter, Facebook, Instagram, SoundCloud, and YouTube as @FrankMurphyCom. Frank’s blog, which was active from 2005 to 2015, was voted one of “East Tennessee’s Best” by the readers of the Knoxville News Sentinel for four consecutive years and the “Best of Knoxville” by the readers of Metro Pulse. He is currently writing a book with stories from his life and career. Frank was in the cast of many Oak Ridge Civic Ballet Association productions from 2010 to 2019, including The Nutcracker, Cinderella, Sleeping Beauty, Beauty & the Beast, and Into the Woods. From 2014 to 2018, he was in the cast of the Front Page Follies, an annual musical spoof of local news stories.Frank is frequently asked to emcee fundraisers and festivals in East Tennessee. Recent events include New Year’s on the Square, the Knoxville St. Patrick’s Parade, the Knox Asian Festival, the Regional Youth Talent Competition, the Knoxville Opera Guild Ball, the Greater Knoxville Heart Walk, the Walk to End Alzheimer’s, the GO! Contemporary Dance Works gala, the Karns Fairest of the Fair Pageant, the Hearth Scares Ball, and the Rocky Hill Christmas Parade. In 2018, he was voted “Knoxville’s Finest Emcee” by the readers of Blank Newspaper.In Knoxville, Frank is heard on 104.9 Lake FM (WPLA). He was previously on-air at WOKI-FM, WTXM-FM, WWST-FM, and WNOX-FM. Prior to moving to Tennessee, Frank worked at KPWR-FM, KROQ-FM, and KLOS-FM in Los Angeles and WAVA-FM in Washington, D.C. Frank graduated from George Mason University, where he won the Senior of the Year award. His hobbies include traveling, swimming, and growing figs. He became a KCBS Certified Barbeque Judge in 2013. Frank has visited all 50 states and hopes to take his wife Jere to the two states she has not yet visited. 1 / 3
Share This Gallery
Congratulations to these teams, who made it to the "Fortuitous Four" in our 2020 Scholars' Bowl Season! 2 / 3
Share This Gallery
Congratulations to these teams, who made it to the "Fortuitous Four" in our 2020 Scholars' Bowl Season! 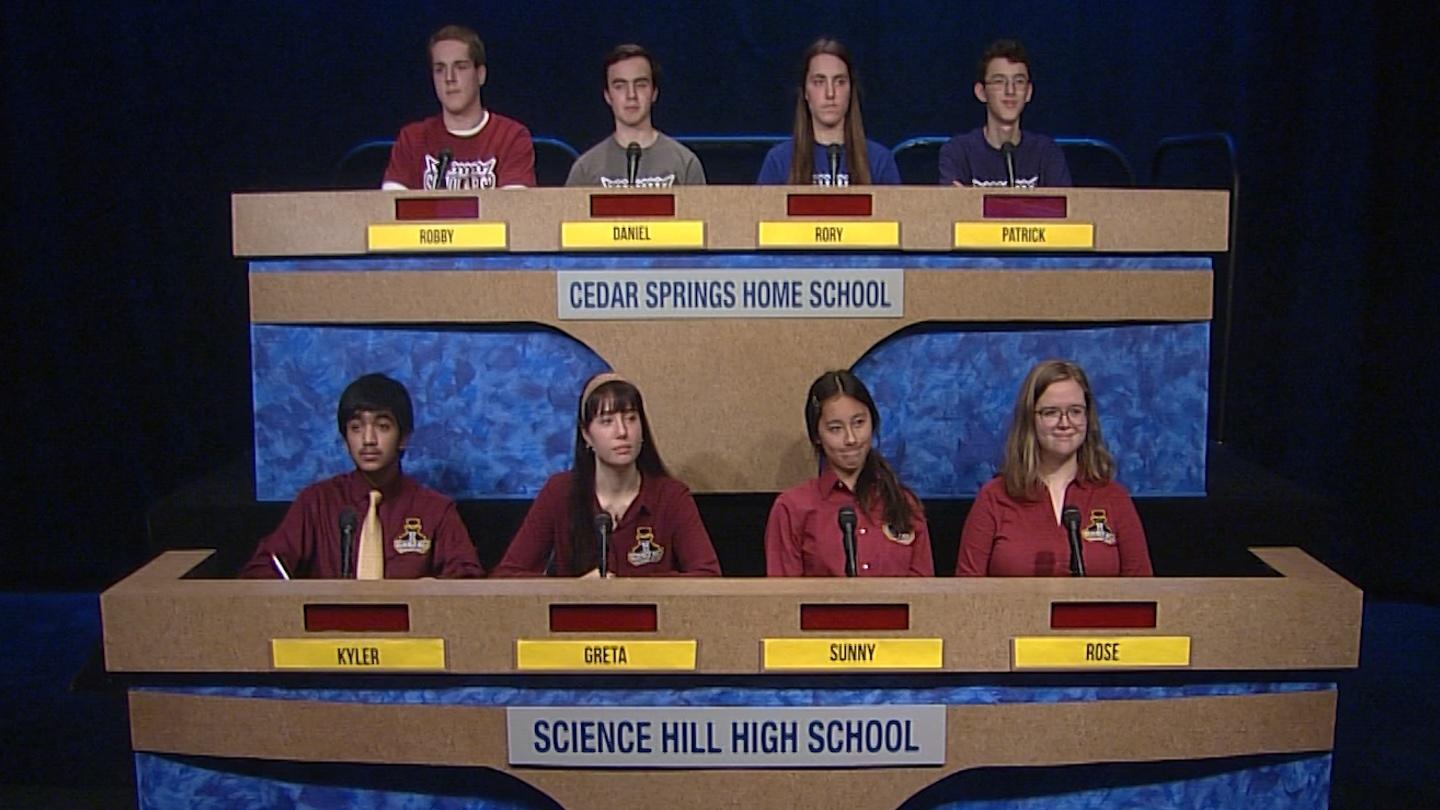 3 / 3
Share This Gallery
Both teams brought their brain power, but Cedar Springs Home School ultimately walked away the victor!

Scholars' Bowl is Sponsored by... 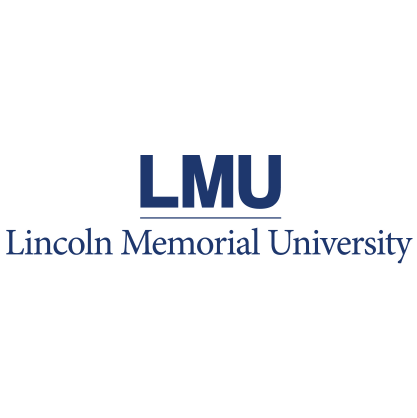 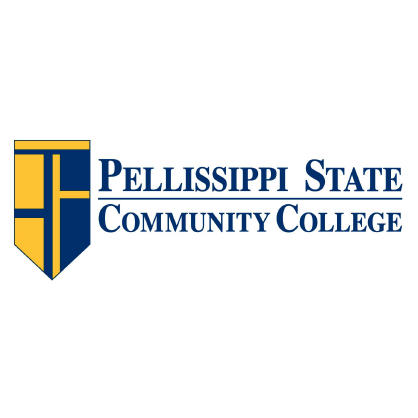 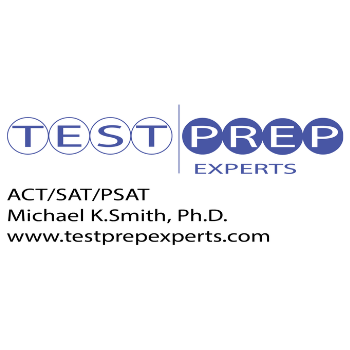