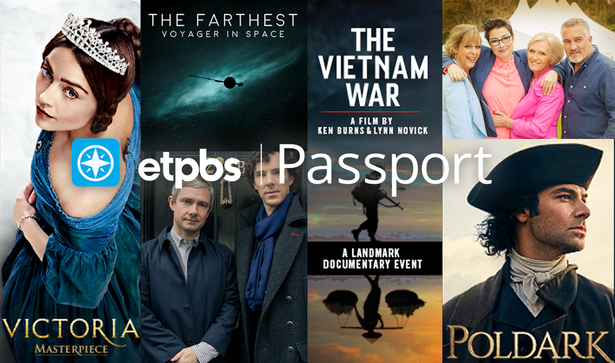 You can stream thousands of PBS programs with Passport, the new member benefit that provides you with extended access to an on-demand library of quality local and national public television programming.  With access to tens of thousands of hours of your favorite programs, East Tennessee PBS Passport allows you to watch even more episodes of your favorites, including full seasons of many current and past series.

Highlights include every past episode of award-winning Masterpiece favorites like Downton Abbey and Wolf Hall, along with Grantchester, Home Fires and Poldark.  You can watch hundreds of hours of Nature, NOVA, Antiques Roadshow, American Experience (including JFK and Walt Disney), Finding Your Roots, The Great British Baking Show, Ken Burns documentaries like Jazz and Prohibition, and so much more.

Victoria decides to try her hand at foreign relations, and takes the royal court on an adventure to France, stepping toe to toe with the cunning King of the French, Louis Philippe.

At the very northern edge of North America is Ellesmere Island, where the unforgiving Arctic winds tear through the tundra, dipping temperatures to 40 below zero. Running through this shifting sea of snow and ice is one of the most hardened predators on the planet, the White Wolf.

Explore the inner life and works of the activist, playwright and author of A Raisin in the Sun, Lorraine Hansberry. Narrated by actress LaTanya Richardson Jackson and featuring the voice of Tony Award-winning actress Anika Noni Rose as Hansberry.

Using his connections, his money, and his brilliant scientific mind, Alfred Lee Loomis, a mysterious Wall Street tycoon and his team of scientists developed radar technology that would arguably play a more decisive role than any other weapon in the war. The Secret of Tuxedo Park tells a long-overlooked story of an individual who helped alter the course of history in World War II.

Episode 5 of Victoria aired last night and started streaming on Monday. As a reminder all episodes of season 2 (and season 1) are available to Passport members right now.

Click here to get your Passport activation link if you have given East Tennessee PBS your email address.